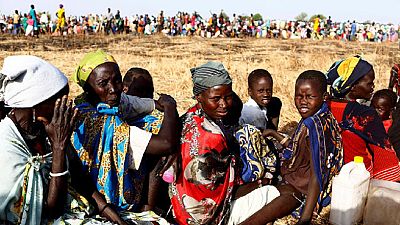 Food aids and vaccination have started to reach some of the 100,000 people affected by famine in some parts of South Sudan.

The UN and other agencies have been struggling to deliver aids in the regions which have witnessed consistent civil war for three years.

The UN had on Monday warned that war and a collapsing economy have set off a famine in South Sudan adding that millions of people are in urgent need of food.

Over a quarter of a million, children are already severely malnourished, If we do not reach these children with urgent aid, many of them will die.

An ethnic conflict erupted three years ago in South Sudan, killing tens of thousands, driving millions from their homes and hindering delivery of life-saving aids.

According to the United Nations officials, Malnutrition rates have soared above emergency levels, and countless people have died of hunger.

“Our worst fears have been realized,” said Serge Tissot of the Food and Agriculture Organization, part of the United Nations.

So far, the famine has affected a relatively small area in the northern part of the country, where the conflict between the government and rebel groups has been most intense.

Thousands of people in that area have fled their homes, and many are living deep in the swamps or sweltering bush and surviving off wild plants and filthy water.

Battles are still raging in many parts of South Sudan, and United Nations officials fear the famine could soon spread.

“Over a quarter of a million, children are already severely malnourished, If we do not reach these children with urgent aid, many of them will die,”Said Jeremy Hopkins, a UNICEF official in South Sudan.

South Sudan constitutes one of the biggest emergencies in Africa, perhaps the largest. The country broke off from Sudan in 2011 after decades of guerrilla warfare.

African Union investigators have detailed accounts of massacres, mass rapes and forced cannibalism in the country.