ECOWAS to downsize its troops in The Gambia after Barrow's return 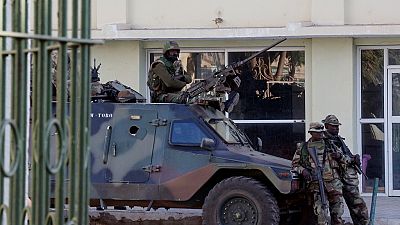 The Economic Community of West African States (ECOWAS) will begin to cut down the number of troops deployed to The Gambia in an operation code-named ‘Micega’. The announcement comes a day after the return of President Adama Barrow to the country.

A statement attributed to the Senegalese General leading the force, François Ndiaye, said the mission of the ECOWAS in the Gambia (Micega) “decided to carry out a gradual reduction in the volume of forces deployed in the theater of operations.”

“This reduction in the volume of forces concerns mainly the land component, but the air and naval forces are also affected to a lesser degree,” General Ndiaye added. When asked about the strength of the troops, the commander refused to communicate a figure for the moment.

This reduction in the volume of forces concerns mainly the land component, but the air and naval forces are also affected to a lesser degree.

The force was tasked with forcing former President Yahya Jammeh out of office upon the expiration of his mandate. Jammeh had refused to accept defeat in elections held in December 2016 and mediation efforts by ECOWAS had ended inconclusively on two occasions.

They however did not intervene because Jammeh agreed – after fresh mediation by Guinea and Mauritanian presidents – to leave the country after 22 years in charge. He is currently exiled in Equatorial Guinea.

President Barrow had requested for the force to remain in The Gambia for six months, a decision that the regional bloc is yet to take a decision on.

They took control of the State House – The Gambia’s presidency – after Jammeh left as part of efforts to secure it and ensure it was safe. They have given a generally positive assessment of the security situation in the country.

Last weekend, ECOWAS Commission President Marcel Alain de Souza said that some 4,000 men had already been involved in the Micega operation, out of a maximum of 7,000 men from five of the 15 countries.

The operation was launched by ECOWAS on 19 January, shortly after Adama Barrow was sworn in the Gambian embassy in Dakar, and then suspended to give a chance to the latest diplomatic efforts to urge Yahya Jammeh to cede power.