Canon partners with the United Nations for the Global Week to #Act4SDGs, to educate and inspire the next generation to become active changemakers

Trading robots - how effective are they? 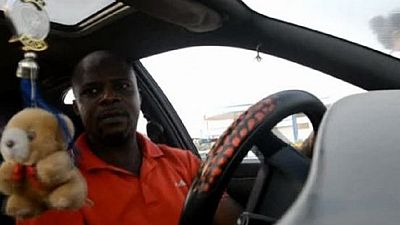 Someone is watching this driver as he makes his way through the streets of Cameroon’s largest city, Douala.

The vehicle is registered on a mobile application known as Traveler, which uses sensor and GPS technology to monitor just how well it is being driven.

The app was created by Achiri Arnold Nji, who is also the start-up’s CEO and some friends who wanted to improve road safety and emergency response to accidents in Cameroon.

“We are trying to provide a rapid response when accident occurs and we are trying to provide information concerning buses all over the national territory in an office. So we are saying that you can sit in an office and you have information concerning a bus. You can just walk around and get a notification about a certain car, be it high speed or an accident, automatically,” said Nji.

The application is available to anyone and does not always need an internet connection. Any passenger with the app can enter the driver’s name and registration of the vehicle they get into.

Companies or individuals running buses, taxis or trucks have shown a lot of interest in the app which also logs information about speed, location and cases of overcrowding in the bus or taxi as reported by passengers.

The app also automatically alerts emergency services, hospitals as well as the families of the passengers if an accident occurs.

“If your bus is driving above 60 kilometers per hour our application will notify you that ‘hello driver’, because there is a driver’s platform too. They can use the same application to control drivers by travel agencies. So the application will pop up a message that look ‘this speed, you cannot bend a corner at this speed it is dangerous’,” said Nji.

More than 70 people were killed and 600 injured when a train derailed on its way from the capital Yaounde to Douala in October last year.

Authorities were criticized for a slow response.

Nji, a 27-year-old electrical engineering graduate says many people do not know who to call in the event of an accident. The lack of information is one of the things his app is trying to address.

Martial Manfred Missimikim, runs an NGO that monitors road safety in the region. He says there also needs to be stronger legislation to govern transport.

“Road accidents are caused by many things. The first reason deals with the law. Strategically speaking, the laws in place are incomplete. Then there is a lack of road safety. There is no institution that is responsible for managing issues related to road safety. So there is a lack of coordination. When it comes to the laws regarding road safety, the laws are not clear. For example, the law that requires passengers to wear seat belts only applies to the people in the front seat, and the lack of clarity also applies to the law regarding the limits of alcohol consumption,” he said.

While technology like the Traveler could help curb road carnage, Nji says there is little support for start ups in Cameroon.

Before the app was launched in October last year, it had already started getting international recognition and winning various awards in the testing phase.

But Nji almost sold the idea because financing and infrastructure were a big challenge.

“The first thing is the absence of the infrastructure. When we started we were hoping that by September 2016 we would have integrated the contact information of all hospitals but because the government is not supportive enough, we’ve not been able to get this contact so we have to move from one hospital to another all over the national territory. You know what that means for start-up, I mean we basically struggling survive and you expect us to pay transport fare to go to Yaoundé to seek authorization, go to the hospital request if they can give us their numbers so that we can notify them if there is an emergency. There is also the problem of internet connectivity. When we made our application it was supposed to be 100 percent real time. When we launched we realized there is so many parts of Cameroon that never had internet so we had to rework it to make it work as a black box if there is no internet,” Nji.

“In order for them to continuously be competitive, especially when the level of competition in Africa and globally is already very high, they need the same level of financial support as other start-ups in Africa and the world, as well as being able to work and recruit more developers. They need to be able to develop solid teams and better their apps. They also need mentors. These mentors can be individuals who have experience and that can help propel their businesses to higher levels,” said Christian Essame, who helps young start-ups develop their ideas.

Travelers can access the app for free but companies pay a fee to use the app in managing their transport fleets.

The app’s developers also hope to generate more revenue working with insurance firms. They also plan to launch into other African countries in the future.

Travelers app has been downloaded 5000 times so far and logs at least 148 users every day.