An attack on an Istanbul nightclub which killed at least 39 people on Sunday was carried out by a single gunman. Turkish Interior Minister Suleyman Soylu said.

A police manhunt was underway after the gunman shot his way into the Reina nightclub at around 1:15 a.m. (2215 GMT), just over an hour into the new year, killing a police officer and a civilian as he entered before opening fire at random inside.

At least 39 people were killed during the attack, many of them foreigners, at the nightclub packed with New Year’s revelers.

According to the information we received from the police, there was one gunman. There weren't multiple gunmen.

“According to the information we received from the police, there was one gunman. There weren’t multiple gunmen. He was wearing a coat and trousers. He went inside as he opened fire around and we were informed that he was wearing different clothes inside and he tried to get out. Our police forces continue to assess this information,” Soylu said.

“Bullets were raining down on innocent people in a very cruel and merciless way,” he said. “These are people who were there to celebrate New Year’s and have fun. This is a terror attack.” said Vasip Sahin, Istanbul Governor.

Eyewitness accounts suggest at least one attacker was wearing a Santa Claus costume, wielding a Kalashnikov and speaking Arabic.

Earlier in the day Soylu announced that 15 or 16 of those killed were foreigners but that only 21 of the bodies had so far been identified. He said 69 people were in hospital, four of them in a critical condition.

The attack again shook Turkey as it tries to recover from a failed July coup and a series of deadly bombings in cities including Istanbul and the capital Ankara, some blamed on Islamic State and others claimed by Kurdish militants.

The club, one of Istanbul’s most iconic that is popular with locals and foreigners alike, overlooks the Bosphorus Strait separating Europe and Asia in the city’s cosmopolitan Ortakoy district.

Turkey attack survivor: There were bodies on the floor https://t.co/8Rp9ECHBQb

Around 500 to 600 people were thought to have been inside when the gunman opened fire, broadcaster CNN Turk said. Some jumped into the waters of the Bosphorus to save themselves and were rescued by police. 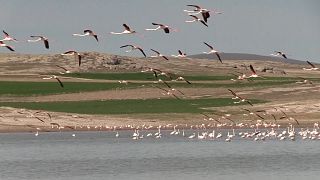