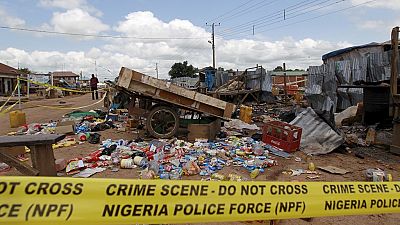 Three people have been confirmed dead in a double bomb explosion on Sunday morning in the Borno state capital, Maiduguri, in northeastern Nigeria.

The blasts were reported to have occurred almost simultaneously at 08:48 GMT in a crowded area near Maiduguri’s main market, local media report.

The three included the bombers who were two girls aged between 7 and 8 years, according to Abdulkarim Jabo, a member of the vigilante group involved in the rescue operation.

He told AFP that they rescued and evacuated 17 injured people to the hospital.

Police spokesperson, Victor Isuku, confirmed that the blasts occured near the main market.

This is the second bomb blast in two days after 56 people were killed and 177 injured in a twin suicide attack in the Nigerian town of Madagali on Friday.

No group has claimed responsibility for the attack but it is believed to have been perpetrated by Islamist militant group Boko Haram.