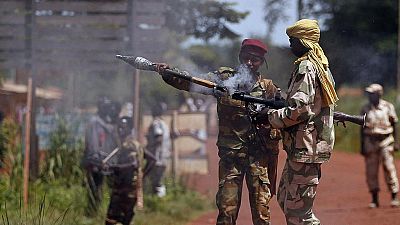 Two days of fighting between armed groups in Central African Republic has left 16 people dead including civilians while 10,000 have fled their homes, the U.N. peacekeeping mission MINUSCA said on Wednesday.

The clashes took place in the town of Bria, about 600 km (375 miles) northeast of the capital Bangui, and pitted the Popular Front for the Renaissance of Central African Republic against the Union for Central African People.

Both militia groups were part of the Seleka, a mainly Muslim coalition that toppled the then-president in 2013, prompting reprisals by Christian anti-Balaka militias and a cycle of violence in which thousands died.

“The clashes … kicked off on Monday morning and caused several victims. According to the figures that we have at our disposal there were at least 16 confirmed dead and thousands of displaced people, MINUSCA spokesman Vladimir Monteiro said.

“These acts constitute grave access liable to be pursued judicially by national and international tribunals,” he told a news conference, adding that the death toll could rise.

The spokesman gave no reason for the clashes.

Violence has reduced since an election in February that brought President Faustin-Archange Touadéra to power and was touted as a step toward peace, but the government lacks power to intervene outside of the capital and clashes remain frequent.

France’s withdrew its peacekeeping forces in October, leaving security largely in the hands of the 13,000-strong U.N. peacekeeping mission.