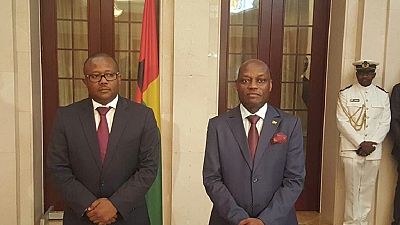 The ruling party in Guinea-Bissau has rejected the new prime minister appointed by the head of state José Mario Vaz and supported by the President of the National Assembly, Cipriano Cassama.

“The PAIGC does not support the decision of the President of the Republic to appoint Umaro Sissoco Embalo to the post of Prime Minister,” according to a statement signed on Saturday.

The party headed by the former Prime Minister, Domingos Simoes Pereira, accused President Vaz of “rendering null and void the Conakry Agreement and opted for the continuation of the crisis.”

The agreement signed on October 14 in Conakry under the leadership of the head of state of Guinea Alpha Conde within an ECOWAS mediation framework provides for a “consensual process” to choose a leader who will remain in place until the 2018 parliamentary elections.

The speaker of the National Assembly assured that parliament would provide the necessary support to the government yet to be formed by Embalo.

The two men have left Bissau together on Saturday for Dakar to meet with Senegalese President Macky Sall.

The appointment of Embalo took place four days after the dismissal of Prime Minister Baciro Dja who has also been condemned by the ruling party since his appointment in June.