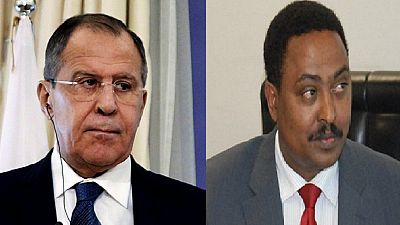 Gebeyehu was appointment as the new Minister of Foreign Affairs of Ethiopia in the latest reschuffle by the Prime Minister, Hailemariam Desalegn, exactly a week ago.

The Russian Embassy in Ethiopia through its official twitter handle stated that Lavrov had congratulated Gebeyehu on his latest appointment. He replaces Tedros Adhanom, who is gunning to become World Health Organization (WHO) boss.

The new minister held a meeting with his predecessor before meeting other key members of the ministry. He will be expected to steer Ethiopia’s diplomatic efforts in a time when the country is at the heart of an anti-government protest that has led to a 6-month state of emergency.

Gebeyehu also received pledge and support of his staff to work with renewed commitment and responsibility. The State Ministers and Director Generals also thanked the outgoing Minister of Foreign Affairs, Dr. Tedros Adhanom, for his tenure in Ethiopia’s diplomatic ventures.