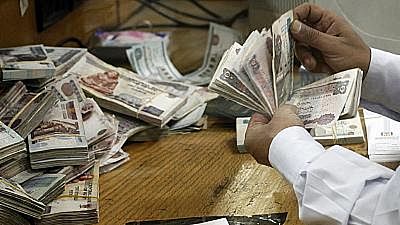 Egypt has floated its currency in a move that has reduced its value by almost 50% against the US dollar.

The North African country also devalued its currency by 48 percent, meeting an important demand set by the International Monetary Fund in exchange for a $13bn loan over three years to overhaul the country’s economy.

This is the first time that it happens to the Egyptian economy, and this is intended to correct the way in which our economic and financial situation is managed.

Thursday’s much anticipated decision by the Egyptian Central Bank followed a sharp and sudden decline this week in the value of the dollar in the unofficial market, dropping from an all-time high of 18.25 pounds to around 13 to the US currency.

The country’s Governor of Central Bank, Tarek Amer said the measure is historic.

“This is the first time that it happens to the Egyptian economy, and this is intended to correct the way in which our economic and financial situation is managed,”

“We are completely dedicated to the policy of exchange rate hose. From Sunday, each bank will have the total control on the way to set its exchange rate“Amer added.

The IMF’s executive board is yet to ratify the $12bn loan provisionally agreed by Egypt and the IMF in August.

The Director of an exchange office in the capital Cairo, Khalif Abdelaziz said it is a good decision.

“It will bring stability to the market, instead of speculation on the foreign currencies, on the price all days, for those who speculate on the black market. Now, this will only be when in allowed. For those who have dollars, they will be able to sell them at a reasonable price to the bank or the bank in a foreign exchange office,” he said.

Here are the challenges ahead as Egypt floats its currency for an IMF loan https://t.co/nL5ufWIYP1 pic.twitter.com/0zjK2w46Cg

Although the liberalisation should help the country to strengthen its economy, it will make life harder for Egyptians and the cost of all imported goods will rise sharply.

Egypt imports about a third of its sugar needs but a shortage of hard currency has meant traders have struggled to buy from outside the country.