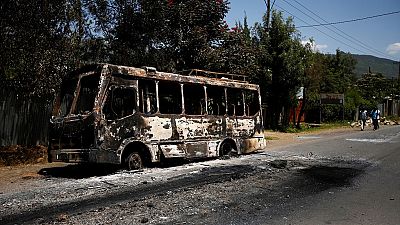 Dr. Tedros Adhanom Ghebreyesus, Ethiopia’s Minister of Foreign Affairs has officially responded to Human Rights Watch (HRW) over its series of reportage in the country.

According to the top diplomat, HRW through its senior researcher for Ethiopia and Eritrea, Felix Horne, was stoking anti-government protests through its false and negative reportage of the situation in the country.

In an article titled, ‘Human Rights Watch encourages opposition violence in Ethiopia,’ Dr Tedros slammed HRW and opposition groups in the diaspora for misrepresentations that were worsening protests leading to the imposition of a state of emergency.

‘‘The suggestion that there were hundreds killed originally came from members of opposition groups in the Diaspora who even claimed that hundreds were shot by helicopter gunships.

‘‘This was a palpable invention, but Human Rights Watch was quick to claim: “an unknown number of people, possibly hundreds, died during a stampede after security forces used teargas and gunfire.”

‘‘One result of this, and similarly invented claims immediately after the tragedy, was an outburst of further demonstrations and attacks on property as well as a number of deaths in various parts of the Oromo regional state.

‘‘It is very clear this happened because of the statements of Human Rights Watch and of the Diaspora opposition encouraging and feeding rumors,’‘ he said.

He further accused the rights body of ‘‘making considerable efforts to push the European Union to use its role as Ethiopia’s main development cooperation partner to force Ethiopia to accept an international investigation.’‘

Dr Tedros accused the HRW researcher of writing articles on the Ethiopia protests without having the requisite information, giving interviews to Reuters and, last week, addressing the European Parliament’s Subcommittee on Human Rights with inadequate information.

‘‘In all of these, in order to support his demands, he has deliberately given impressions and made claims he knows to be false about recent events, notably the Ireecha tragedy on October 2,’‘ he stated.

Ethiopia’s top diplomat also deplored the manner in which Human Rights Watch has increasingly failed to disclose the sources of their information in the country. He said the group continued to peddle false information despite proof to the contrary.

He was particularly displeased at reports that the security had fired live ammunition at protesters during the Ireecha festival. He insisted that the cause of the deaths were a result of tragic drowning and crushing of persons during the stampede.

‘‘There is, in fact, no evidence (though there are a multitude of allegations made over social media) of any more deaths than the official figures of 55 who died, all from being tragically drowned or crushed in the stampede.

‘‘None of those who died were killed by gunshots, despite Mr. Horne’s claims, as has been confirmed by reports from the hospitals in Bishoftu,’‘ he added.

The government recently imposed a state of emergency to quell a wave of anti-government protests in the Oromia region.

Opposition groups and western diplomats in the country have decried the the government’s decision to impose the state of emergency. The move has been described as a measure to continue with increased repression of opponents.