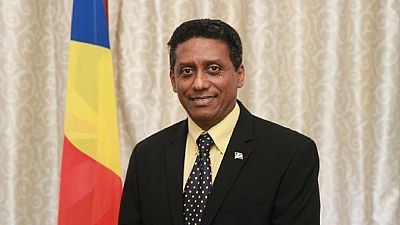 <p>Seychelles swears in Vice President Danny Faure as president on Sunday afternoon after James Michel resigned only 10 months into his third and final five-year term as president.</p> <p>54-year-old Faure is taking over as provided by the constitution to complete the final five-year term of Michel whose resignation followed the opposition’s win of majority seats during September’s parliamentary elections.</p> <p>The opposition has however called for another presidential election to be organised by the new president to “reflect the people’s choice”.</p> <p>“Seychelles must have a president who is directly elected by the people,” the opposition leader in the National Assembly, Wavel Ramkalawan said.</p> <p>“There is an abuse of our Constitution and we ask that the provision 55.1 (of the Constitution, ed) be amended so that power can no longer be passed to another person,” Wavel Ramkalawan added.</p> <p>On October 8, the opposition marched through the streets of the capital Victoria demanding a new presidential election. </p> <p>The governing party responded a week later by organising a rally to show support for Danny Faure.</p> <p>The new president might face difficulty in the coming days when he presents his policy and new government including a new vice president to the opposition-dominated parliament.</p> <p>Their rejection will create a deadlock and the only option for the president will be to dissolve the parliament and call a new election. If he dissolves parliament for a second time, he will be mandated to hold a new presidential election.</p>