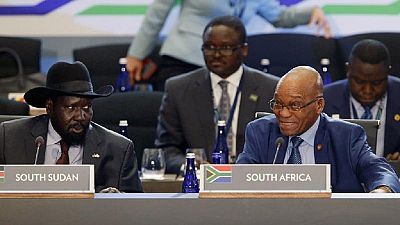 South Sudan’s former vice president and opposition leader, Riek Machar, says he wants to meet South African president Jacob Zuma and his vice Cyril Ramaphosa to tell his side of the story relating to the political situation in Africa’s youngest country.

Machar is in South Africa to seek medical treatment, he flew in from Sudan where he was staying after fleeing renewed armed conflict between his forces and those loyal to president Salva Kiir.

In an interview with South African news portal News24, he said, “I really want this great country South Africa and its government to play a role in bringing about peace in South Sudan like they did in 2015 agreement.

They should not give up on it. The government should play a vital role in initiation of political process to bring a swift end to conflict,” he added. He also reiterated his stands that only a new peace process will be the route for his return to the country.

Responding to a question about how his health, ‘‘I am physically fit, I can run 500 miles again, so I am here for routine checkup,” Machar said.

President Zuma reportedly slammed Machar during his visit to Kenya last week. ‘‘We condemn the recent call by SPLM in the opposition under Dr Riek Machar for a popular armed resistance against the government in Juba. We call on Dr Machar to return to Juba,’‘ Zuma said in Nairobi.

Machar has been slammed from various quarters after he called for armed resistance to the government. The US said Machar’s position was “inexcusable” and showed a lack of concern for the well-being of the people.

“We find it inexcusable that he would continue to promote armed resistance. It indicates a lack of concern for the well-being of the South Sudanese people, many of whom continue to struggle just to survive and just as much want to see peace,” a top US official said.

Machar led a two-year rebellion against incumbent Salva Kiir, before the two sides reached a peace deal in August 2015. Under the deal, Machar returned to the capital Juba and resumed his role as first vice president.

Renewed fighting between the two forces in July this year prompted Machar to flee from the country with his supporters. Kiir subsequently sacked him from his government position and named former opposition negotiator Taban Deng Gai as first vice president.

The South Sudanese government has cautioned Machar that it will not accept threats of armed conflict. They ahve also called on the international community not to back this threats in any way.