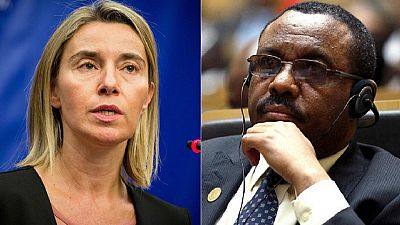 The High Representative of the European Union (EU) for Foreign Affairs and Security Policy, Federica  Mogherini, has tasked the Ethiopian Prime Minister Hailemariam Desalegn to respect democratic principles and civil rights in the country.

Mogherini, who is also Vice-President of the European Commission said there was the need to initiate an inclusive political dialogue within the shortest possible time. The dialogue ‘‘will require space, not restriction,” an EU statement said.

She further underlined the need for transparency and determined engagement by the government to respond to the grievances of the population. The EU said it expected the opening up of the democratic space, and respect of fundamental freedoms.

The two leaders, spoke in a phone call, where they discussed developments in the country – particularly the recently imposed six-month state of emergency.

The EU chief expressed concern over the curfew imposed on October 9 and its possible effect on democratic principles and civil rights of citizens. The Prime Minister on his part assured that the state of emergency will not breach human rights protected by the Ethiopian constitution.

The PM had earlier this week assured that plans were underway for electoral reforms and the EU further urged that necessary political reforms are conducted to achieve this goal.

Mogherini also emphasized that talks between the government and opposition if done expeditiously will provide an inclusive economy with benefits for all, notably the youth.