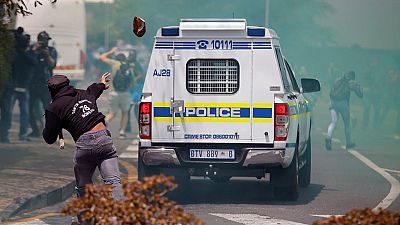 South Africa’s police chief has disclosed that criminal gangs have joined the #FeesMustFall protests that has hit several universities across the country.

Lt. Gen. Khomotso Phahlane was delivering an update on security and policing matters relating to the protests. According to him, the police were ‘‘operationally ready to police’‘ any further protests.

‘‘It is evident that criminality has taken advantage of young people in the universities under the disguise of the #FeesMustFall initiative.

‘‘We have noted info that suggests #FeesMustFall has been infiltrated by forces not aligned with those who seek Free Education,’‘ the police chief said.

He reiterated that the police will clamp down on any violent elements when necessary. He added that majority of universities are currently closed and in general the situation was calm across most campuses, including those that are open.

He also spoke about clashes between rival student groups. Those calling for free education and others who have resolved to take their classes especially at the famous Wits university.

#sapsHQ Investigations into arson cases are at advanced stage, can confidently state that arrests are imminent #Phahlane #FeesMustFall SD

#sapsHQ There's sporadic incidents of public disorder, violence which deserve to be condemned, discouraged by all #Phahlane #FeesMustFall SD

Police in South Africa have repeatedly dispersed university students protesting over high tuition fees as part of a nationwide demonstration. Police have used stun grenades and arrested several students on campuses across the country.

The protesting students are demanding free education for all, despite the government’s proposal of a tuition hike of up to eight percent.