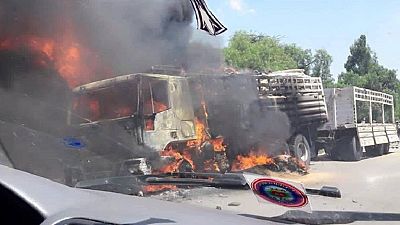 Trucks and machinery belonging to the Dangote group was attacked by protesters in Ethiopia’s Oromia region. The attacks followed a deadly stampede at a festival over the weekend.

The attack which took place in the town of Ada Berga targeted the cement factory owned by Africa’s richest man Nigerian Aliko Dangote.

The state owned Fana Broadcasting Corporate said, the Oromia Regional State had earlier reported that lives were lost and property damaged in some areas of the state, apparently in reprisal to the incident over the weekend.

Local media added that a court building and government-owned vehicles were also torched.

The ensuing stampede led to deaths of at least 55 people. The government denies claims by activists that security forces opened fire at the festival, causing the stampede.

Among the thousands of festival participants, a number of them marched chanting anti-government slogans and their arms crossed above their heads.