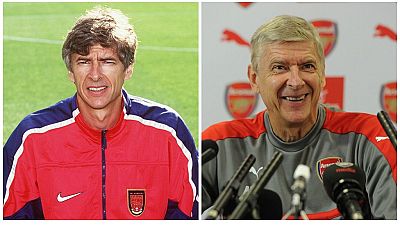 Arsenal manager, Arsene Wenger, celebrates two decades in charge of the north London side. Wenger was appointed by the Arsenal board in 1996.

The Frenchman has hailed the impact of African players in his career. He was speaking during a pre-match press conference on Friday ahead of his 20th anniversary game against Burnley on Saturday.

‘‘African players had a massive impact on my career because I always managed them right from the moment I started in the top league in France,” Wenger said.

The Frenchman singled out Ivorian international Kolo Toure, who he signed from local side Asec Mimosas in 2002. Kolo went on to play 225 games for the club scoring 9 goals. He moved to Manchester City in 2009. He is currently with Celtic.

The other African Wenger lauded was former Nigerian international, Nwankwo Kanu. He joined Arsenal form Italian side, Inter Milan in 1999 and departed for West Bromwich Albion in 2004 with 119 appearances and 30 goals during the period.

Incidentally, the two players were part of a recent charity match between Arsenal legends and their counterparts from Italian side, AC Milan. Wenger also spoke fondly about George Weah who he managed at French side, Monaco.

“I had African players at Monaco and I like the fact that they were creative and they are usually attacking players with imagination. They have pace and power as well, and they usually combine strength and agility well. That’s very difficult to find.

“Africans are hugely passionate people and there is a big passion in Africa for the game. They are happy on the football pitch and that’s something which has been fantastic for us. Kanu had a massive impact here, Kolo Toure too, I had George Weah too… so all these players had a massive impact,” the club’s website quotes Wenger as saying.

He however says he will prefer to look to the future rather than to dwell on the past. “A lot has changed. [The art of management] has changed, the club has grown bigger, is now a global club. Twenty years ago it wasn’t as big, or as expensive! Football has become popular, it’s become a world sport,’‘ he added.

Aside Kolo and Kanu, Here are some of the African players who have been signed by the Frenchman during his tenure as manager: