Tensions were high at South Africa’s Rhodes University on Wednesday as police and students scuffled at a demonstration over tuition fees.

Demonstrations against a rise of up to eight percent in tuition fees from 2017 have gathered momentum in the last two weeks, spreading to universities across South Africa.

Protests over the cost of university education – prohibitive for many black students – have highlighted frustration at enduring inequalities in South Africa more than two decades after the end of apartheid.

“Do your job according the laws of South Africa, there’s a difference between crossing and blocking a road,” one student, Tartius Nizinga, says in footage published by student news portal The Oppidan Press, before attempting to cross the road. Police fired rubber bullets at protesters when Nizinga walked back to face the demonstrators.

Police arrested 11 students at the event and several protesters were taken to hospital with injuries. Students have subsequently accused the police of brutality after the video was posted online.

The University of Johannesburg said it would meet with its private security teams on Thursday (September 29) to tighten up procedure.

Violent protests last year forced President Jacob Zuma to freeze tuition fees for 2016, but universities said that to do so again in 2017 would diminish academic standards. 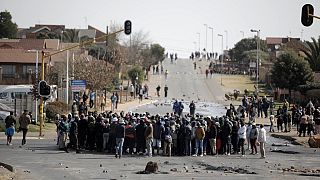