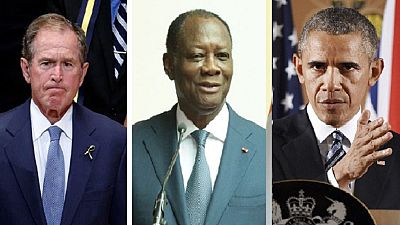 President of the United States (US), Barack Obama, has lifted economic sanctions imposed on Ivory Coast in 2006 by the regime of his predecessor, George Bush.

The US president cited advancing democratic credentials of the west African nation as the reason behind terminating the national emergency declared by the US in Executive Order 13396, it was this order that led to the imposition of sanctions.

‘‘The President determined that Cote d’Ivoire’s advances in restoring peace and democracy and developing its political, administrative, and economic institutions represent significant improvements since President Bush declared the national emergency in 2006,’‘ the US Department of State noted in a statement.

We will continue to support the people and government of Cote d’Ivoire in their efforts to strengthen the country’s democratic institutions and to pursue economic reforms that will ensure long-term development.

Whiles observing that the country had made great progress since the political crisis of 2010 – 2011, the US said it was optimistic of lasting peace and inclusive prosperity in the Ivory Coast.

They also lauded last years’ polls in the country describing it as a ‘peaceful, transparent, credible and inclusive.’ The 2015 polls gave incumbent president Alassane Ouattara his second and final term in office.

‘‘Cote d’Ivoire is continuing the vital work of national reconciliation and security sector reform, which includes professionalizing its security forces and reintegrating former combatants and refugees.

‘‘We will continue to support the people and government of Cote d’Ivoire in their efforts to strengthen the country’s democratic institutions and to pursue economic reforms that will ensure long-term development and shared prosperity for all Ivorians,’‘ the statement concluded.

Wednesday’s move follows the lifting of a 12-year-old arms embargo, asset freezes and travel bans against six individuals by the UN Security Council in April, among the six was ex president Laurent Gbagbo, who is currently facing war crimes charges at the International Criminal Court in the Hague.

Ouattara won the 2010 elections but Gbagbo – the then incumbent – refused to concede defeat, leading to a political strife. French forces helped forces loyal to Ouattara to depose him later in 2011.

Ivory Coast has since gone on to become one of Africa’s key economic success stories and seen as a model of post-conflict reconstruction and political reconciliation.