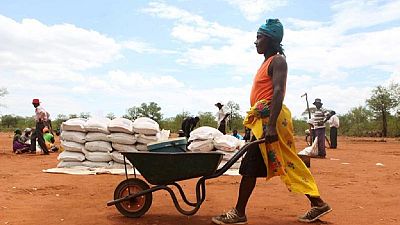 The Indian government through its ministry of external affairs has confirmed a $1 million grant to drought hit Zimbabwe. The Asian giant also announced that logistical modalities are being worked out for donation of 500 metric tonnes of rice in the second phase of assistance.

This follows an appeal by the southern African country hit by a bad economic downturn and worsened by the effects of the El-Nino phenomenon. The funds were handed over by Indian Ambassador to Zimbabwe.

Dr. Misheck Sibanda, Chief Secretary to the president Mugabe and cabinet thanked India for their quick response to the plight of Zimbabwe who made an international appeal for support to help combat the effects of El Nino induced drought disaster.

Sibanda further stated that Zimbabwe was happy with the sound relationship that exists between them and India in critical sectors of the economy such as SME, ICT, energy, education and pharmaceuticals.

Reports indicate that close to four million Zimbabweans are malnourished as the country’s drought worsens. Farmers say they have lost cattle and crops and fear that things might soon get out of hand.

The failure of rains during the second season has been catastrophic as Zimbabwe struggles to recover from a recession which led to hyperinflation and shortages.

According to the United Nations Development Programme (UNDP), close to 5 million people will need aid by March 2017. Zimbabwe is awaiting a $1.6 billion aid package which will be used to pay for grain and other food items.