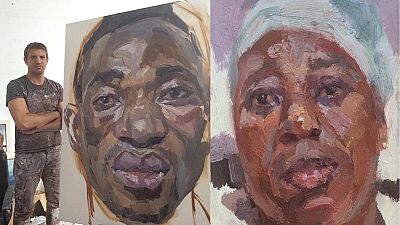 The most prominent sights of the deadly Ebola that hit west Africa, killing thousands and forcing a social shut down amongst others were, fully clothed medical and social workers, grieving family members and unmarked graves.

Then in the light of World Health Organization’s response to the epidemic, Ebola testers at entry points, laboratory experts keenly probing the genesis and how to arrest the rampaging scourge, not to forget the dead bodies littering the streets. Corpses that even clothed personnel appeared wary of.

These pictures and imagery may seem too powerful for an art board, oil paint, rags and a set of brushes. While medics and social workers plus politicians trooped into the ‘danger zone’ to undertake assessments of the scourge and fashion a global response, a man who could not solve the medical or political problems also joined the fray.

He walked in where medics at times feared to tread with nothing more than a camera. To capture unique images that were not to be sold to the media, but photographs he would rework, rework with oil paint and carefully curated and cultured brush strokes to immortalize the Ebola dead and to inspire survivors.

Meet Tim Benson, a product of the Glasgow School of Art and Byam Shaw School of Art between 1998-2001. Tim is a contemporary artist who has received recognition with his election as Vice President of the Royal Institute of Oil Painters.

As a top class figurative artist, Tim with his work goes beyond the unique likeness of a subject. Over and above that, he evokes the sitter’s character and mood. He is never satisfied with simple representation, rather concentrating on bringing to his work an emotive and often visceral quality.

#Ebola Timelapse over 2.5 hours of the development of a new portrait for my Ebola series. I love painting these! pic.twitter.com/wPUXanxeir

An exhibition scheduled for November this year under the theme ‘‘Faces of Ebola – Mall Galleries’‘ will have on display Tim’s works – painted portraits and audio interviews – on Ebola survivors and the support system  that cared for victims in Sierra Leone, which was one of the worst hit.

It is common knowledge how the disease – which gained the status of an epidemic by WHO standards – in addition to the untimely deaths and social shutdown has left with survivors, a legacy of continued social and professional stigmatization that leaves many jobless, homeless and without family.

‘Faces of Ebola’ seeks to tell their stories with a percentage of funds raised going to help these people rebuild their lives.

#Ebola more from the series of paintings of those affected by Ebola in Sierra Leone. pic.twitter.com/oEbl2sSiRX

But long before the flames of the exhibition are ignited, Tim does a social media presentation of what is to be expected. Via micro blogging platform Twitter, he posts pictures and brief profiles of the ‘players’ for the November ‘charity game.’

‘‘Faces of Ebola’‘ at the Mall Galleries is not Tim’s first and certainly not his last, he regularly exhibits in solo and group exhibitions around the UK. The Ebola exhibition will run from 7th to 13th of November.

‘‘He displays fine art paintings that stand on their own as collectible works of art and accordingly has established a large following and collector base. In addition to his fine art pieces, he accepts more formal portrait and figurative commissions in oil or charcoal,’‘ his official website said.

As the world canvassed to help Sierra Leone, Liberia and Guinea to combat Ebola, as the government and partners canvas to help revamp and reshape the health care systems in respective countries, Tim Benson is using his canvas to document pictorially what has been painfully lost and that which remains.

The exciting part though is of the light and colour that his work exudes, so much so that each subject seem to convey a message. One of hope and the will to make things better.

Ebola is defined as a severe and often fatal disease in humans and nonhuman primates (monkeys and chimpanzees) It is caused by the Ebola virus and is characterized by high fever and severe internal bleeding. It can be spread from person to person and is largely limited to west Africa.