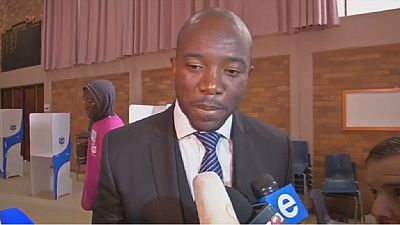 Mmusi Maimane, leader of South Africa’s main opposition party, the Democratic Alliance on Wednesday morning, when voting kicked off, said with confidence that his party will do well.

Perhaps referring to recent developments that have put the ruling ANC party in the back foot, due to issues around corruption, governance and service delivery.

“We expect to do well, not only here in Jo’burg, in Tshwane, Nelson Mandela Bay and to govern more municipalities across the country. We have shown growth,“said Maimane

Talk has been rife that these local elections will be different from the previous polls. Reference being made to the 2011 elections, when the ruling party’s voter percentage slipped down significantly in the hotly contested metropolitan cities.

South African political analyst, Professor Somadoda Fikeni says new voters are starting to look at the actual delivery instead of voting based on the narrative that the ANC liberated the country.

“All of the promises of liberation, some of them have not been realized. The second one, the perception of the high level of corruption, the in-fighting and factionalism within the ANC itself and and some of the scandals that have been associated with the ANC leaders – particularly the President.”

Results will not start coming in until the early hours of Thursday, with the preliminary totals expected about 24 hours after polling stations close.