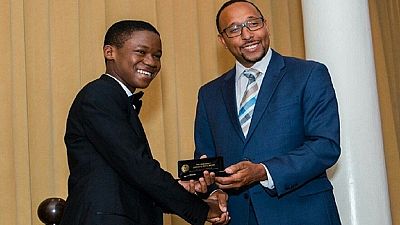 Young Ghanaian actor, Abraham Attah, who starred in the award winning ‘Beast of No Nations’ film has been awarded for ‘Excellence in the Arts’ by the city of Worcester in Massachusetts, the United States of America.

The award ceremony which took place in Worcester is part of the ‘African Youth Excellence Awards,’ and Attah picked up the honorary award for his achievement as a young actor.

He was given the symbolic ‘Key of the City’ by the Mayor, Joesph M. Petty for his ‘‘accomplishments and rising stardom in Hollywood as a young actor,’‘ a letter accompanying his award read.

Your award winning performance captivated world audiences, these profound strides serve as inspiration for other young actors like you. You have a unique and bright future ahead of you.

‘‘Your award winning performance captivated world audiences, these profound strides serve as inspiration for other young actors like you. You have a unique and bright future ahead of you. For these remarkable accomplishments and the many to follow, it is only fit that you be recognized,’‘ the letter added.

The ‘Key to the City’ program in Worcester was started in 1924 by one Mayor Michael J. O’Hara.

The African Youth Excellence Awards is an annual event which highlights the accomplishments of pursuers in the areas of art, education, information technology, entrepreneurship, innovation and humanitarianism.

Its objectives are to recognize and shine the light on young Africans pursuing excellence and also create and environment for networking.

Attah recently earned a new role in upcoming American superhero film ‘Spider-Man: Homecoming,’ and he is currently on location with other Hollywood stars in Atlanta, Georgia.

‘Spider-Man: Homecoming’ is billed as the second reboot of the Spider-Man film franchise. The film expected to be released in July 2017 would be the sixteenth film of the Marvel Cinematic Universe (MCU).