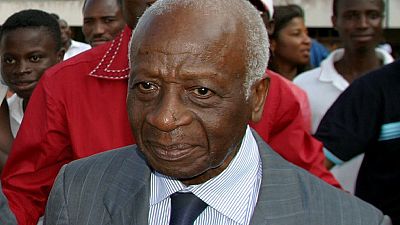 “We are all in mourning former President Emile Derlin Zinsou, passed away last night after 11pm at home,” Gratien Ahouanmenou, a family friend said.

Emile Derlin Zinsou, was president of Dahomey from July 1968 to December 1969.

He was Minister of Foreign Affairs from 1962 to 1963 and again from 1965 to 1967 and was a mediator in the Democratic Republic of Congo during that country’s civil war in the late 90’s.

He was the uncle of former Prime Minister Lionel Zinsou of Benin.

In 1969, Emile Zinsou and other world leaders contributed goodwill messages to a disc left on the surface of the Moon by the Apollo 11 astronauts.

“The genius and daring of a great nation today open to mankind the secrets of a planet, which, for centuries, it has been able only to probe and to admire from a great distance, through the narrow hole of its telescopes. Today the dream has been realized. It is thanks to the talent and sacrifices of the great American nation. But it is also thanks to that which has been achieved through the ages and centuries by the knowledge, science, and technology of men, of all men. The lunar epic of the Apollo 11 astronauts thus opens in the history of mankind a new, grandiose cycle of space exploits and gives rise to great hopes. !‘On this day of triumph and in this historic hour, I express personally, and in the name of the People of Dahomey, my wishes for Peace, Brotherhood, and Good Fortune for all mankind and for all men. May man’s first steps on the moon convince those on earth to vow one day soon to employ science and technology only in the service of Peace and Progress.”