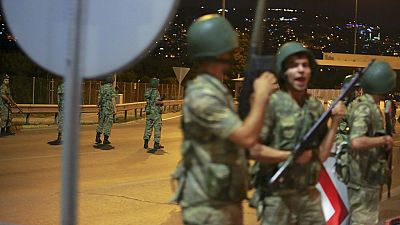 Social media, particularly Facebook and Twitter services have been blocked in the Turkish city of Ankara on Friday as the army announce a successful coup in the country.

The Turkish military announced Friday taking power in a statement posted on the website of the General Staff of the armed forces after taking the Chief of Staff “hostage” in the military coup, according to television channels and the pro-government agency, Anatolia.

“General Hulusi Akar, Chief of Staff of the Armed is held hostage by a group of soldiers who attempt an uprising,” the agency said citing “reliable sources”.

General Hulusi Akar, Chief of Staff of the Armed is held hostage by a group of soldiers who attempt an uprising

According to local media, all security personnel have been urgently called in to work, while two main bridges in the capital Istanbul, the Bosphorus which links Asia to Europe, have also been blocked by troops. Helicopters are also flying low over Ankara and Istanbul.

Part of the military is attempting a an ‘‘illegal coup’‘ in Turkey, the country’s Prime Minister Binali Yıldırım has said.

A military helicopter has reportedly opened fire in the district of Ankara where the Turkish National Intelligence Organization headquarters is situated. According to Yıldırım, Turkish security forces are currently doing what needs to be done to resolve the situation.

Shooting is being reported in the Turkish capital, Ankara, with military jets and helicopters seen in the sky above the city.