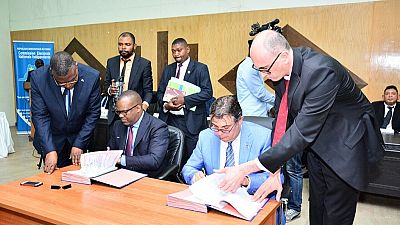 The Democratic Republic of Congo has taken bold steps towards an election expected to take place later this year. The DRC has contracted a Dutch outfit to help the electoral body compile a biometric register and to conduct the elections.

Gemalto, a world leader in the area of digital security is to help the Independent Electoral Commission of the Democratic Republic of Congo (CENI) with 22,000 mobile biometric voter enrollment kits.

According to Corneille Nangaa, President of CENI, “We needed a reliable partner to facilitate our ambitious program, which we expect will enroll up to 45 million voters,”

With a wealth of experience in enrollment and voter registry applications in Africa and beyond, Gemalto offered an excellent technical fit, and the ability to react quickly to our requirements.

“With a wealth of experience in enrollment and voter registry applications in Africa and beyond, Gemalto offered an excellent technical fit, and the ability to react quickly to our requirements,” he added.

Gemalto is also expected to train the operators for CENI and also provide maintenance and support during the entire registration project, touted as one of the largest in Africa.

“Our secure mobile enrollment solution will enable CENI to establish a reliable and respected voter registry, based on indisputable biometric data, and provide all the flexibility required to set up voter registration bureau all across the country” said Frederic Trojani, Executive Vice President for Government Programs at Gemalto.

“Above all else, it provides the Democratic Republic of Congo with a trusted foundation towards free, fair and transparent elections.”

For months, the political climate is tense in the DRC because of the uncertainty of highly probable postponement of presidential elections due to take place in late November.

The opposition accuses President Joseph Kabila who has been in power since 2001 of maneuvering to stay in power beyond his term in December even though the Constitution does not allow him to stay on.

A court had ruled that if the country fails to organize elections later this year, the incumbent Joseph Kabila could stay on as President. Even though he has yet to make known any ambitions to run for an ‘unconstitutional’ third term, there has been pressure from home and abroad calling on him to step down at the end of his tenure.