Nigeria: A Urine test for malaria 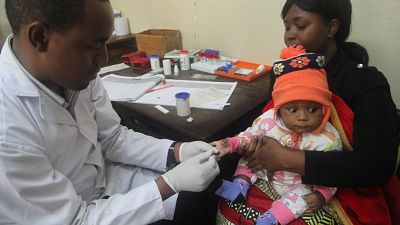 A Nigerian biotechnology firm has come up with a new simple method for diagnosing malaria. This marks the first time urine, and not blood, is being used to test for malaria.

The new technology called Urine Test for Malaria (UMT), is a non-invasive bloodless rapid test that can diagnose malaria in less than 25 minutes.

UMT uses a simple dip-stick and unlike the old method which requires health personel, people can self-diagnose for the disease at home.

Eddy Agbo, is a biochemist, and the founder of Fyodor, the biotechnology firm that developed this urine test kit. He says that the technology that took him 8 years of research and development, detects malaria parasite proteins in a patient’s urine.

“Urine is acidic sample , usually when a protein is present in an acidic enviroment, it unravels, it becomes difficult to detect by conventional approach, so we had to re-engineer the tool so as to be able to fish it out be it even in that unconventional state,” says Dr. Agbo.

This innovation gained international and local recognition after winning the inaugural 2015 Health Innovation Challenge awards in Nigeria. It was also nominated for the African Innovation Foundation (AIF) award in collaboration with the Government of Botswana.

Africa continues to bear the brunt of the global burden of malaria. According to the World Health Organisation, 88% of global cases and 90% of global deaths occured in the African Region in 2015. Between the years 2000 and 2015, the number of malaria cases worldwide also declined by 42% while the malaria death rate declined by 66% in Africa.