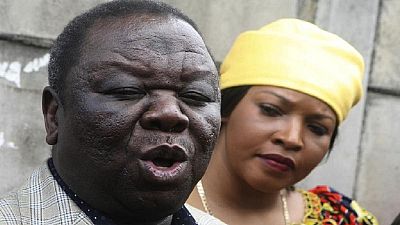 Unrelenting Zimbabwean opposition leader, Morgan Tsvangirai has finally disclosed that he is suffering from colon cancer and is in South Africa to receive treatment for the ailment.

According to Zimbabwe’s Hearld news portal, Mr Tsvangirai disclosed his ailment in a statement on Monday afternoon, parts of which read:

“On the 8th of May, 2016, my Zimbabwean doctors referred me to South Africa where a further diagnosis revealed that I am suffering from cancer of the colon,” his statement said.

On the 8th of May, 2016, my Zimbabwean doctors referred me to South Africa where a further diagnosis revealed that I am suffering from cancer of the colon.

“Following the diagnosis last month, I underwent an operation last month that was successful. However, a diagnosis of cancer is the first of several medical procedures that include treatment through chemotherapy, which treatment I began this week,” it added.

#Tsvangirai's confirmation follows recent reports that he had been travelling to South Africa for treatment of an undisclosed ailment. TM

Morgan Richard Tsvangirai (his full name) started out in politics as a member of the ruling ZANU-PF but currently is leader of the opposition Movement for Democratic Change -Tsvangirai (MDC-T). He served as Prime Minister of Zimbabwe under Mugabe from 2009 to 2013 during a power sharing deal.

He has been active in the political discourse of Zimbabwe ahead of upcoming polls and he was widely expected to stand against president Robert Mugabe and former vice president Joyce Mujuru.

He was also a former secretary of Zimbabwe Congress of trade Unions. He has been arrested on several occasions even assaulted in 2007. He lost to Mugabe in 2002 polls and led Mugabe in the 2008 elections but refused to run for a second round after claiming he had won a majority in the first round and the second round was not going to be transparent.