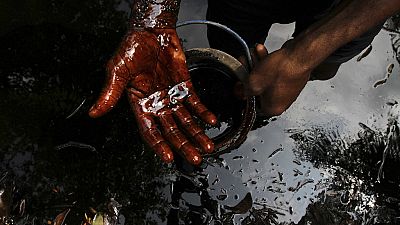 Nigerian president Muhammadu Buhari returns to the restive Niger Delta region for the first time since he assumed the presidency. He will be there to flag off the clean up of the oil polluted Ogoniland.

The clean-up estimated to cost about $1 billion would seek to sanitize the creeks, swamps, fishing grounds and mangroves that have been destroyed by oil spills from multinational giants Shell, the country’s oil producer and other private firms.

Buhari’s visit comes in the wake of renewed attacks by a group known as the ‘Niger Delta Avengers’ who have blown up oil installations in the region, thereby worsening already dipping production figures.

The Niger Delta Clean Up project will no doubt go down in history as one of the biggest ever carried out.

Nigeria’s Environment Minister, Amina Mohammed who would be key in the flagging off event has said, ‘‘the Niger Delta Clean Up project will no doubt go down in history as one of the biggest ever carried out,’‘ describing it further as a collective responsibility.

Delivering On The Ogoni Promise and Keeping the Niger Delta Clean; Our Collective Responsibility. #NDCleanUp

32 years ago whiles serving as a military ruler, Buhari visited the then pristine Ogoni land where he commissioned a fish farm project in Bodo. Pictures of his visit in 1984 are currently trending on Nigeria’s twitter space.

Nigerians are also using the hashtag #NDCleanUp to speak about the much expected event which was a key campaign promise of Buhari’s All Progressive’s Congress (APC) party.

#NDCleanup During the campaigns for the 2015 elections, MBuhari promised to lead the cleanup of the Niger Delta. pic.twitter.com/oR8kTh2tCu

According to agreements signed in respect of the clean up, about $200m (£139m) will be spent yearly for five years to clear up the devastated 1,000 sq mile (about 2,600km2) region in Rivers state near Port Harcourt, but analyst say more funds may be needed to restore the ecosystem fully. The UNEP is reported to have said that the entire clean up could last 30 years.