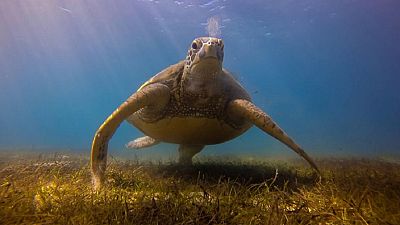 As part of an initiative to provide important scientific data on the migration, health status and number of green turtles, the Emirates Wildlife Society – World Wild Fund (EWS-WWF) in the United Arab Emirates and their marine experts will over the next four years gather scientific data on green turtle migration in order to identify critical marine habitats that need to be protected.

The Bu Tinah Island in the Marawa Marine Biosphere Reserve (an hour and a half drive away from Abu Dhabi by speed boat) serves as a great spot for the scientists from EWS-WWF as the Arabian Gulf region is well known for its sea turtles and rich biodiversity.

The Gulf Green Turtle Conservation Project is the continuation of the Emirates Wildlife Society – World Wild Fund’s efforts to protect the Gulf waters and follows another similar initiative launched in 2010.

What we expect the planet to be, in the coming fifty or hundred years, the Gulf is already experiencing today. In many ways this is like a “living laboratory” for studying how climate change can impact marine species.

The population of the world’s seven turtle species has declined dramatically over the years due to human actions including modification or loss of nesting beaches, habitat degradation and loss caused by pollution, climate change and coastal development.

Do you know that the #GreatBarrierReef is home to 6 of the world's 7 marine turtles? https://t.co/NrIKUvEolT pic.twitter.com/IRJqL2iEJv

The Green turtles are a migratory species that depend on a myriad of locations and habitats for their survival. They move between shallow undersea feeding grounds, open ocean and on-shore nesting beaches.

Because they depend on more that one habitat, their status and number can tell us a lot about the health of the wider marine environment.

Marine Project manager for the EWS-WWF, Jimena Rodriguez glues a transmitter onto the shell of the turtle.

Sea turtles spend 95 percent of their lives at sea and only brief periods on beaches for nesting as a result, there is a considerable information gap on the feeding and behavior patterns of marine turtles when at sea.

Marine Antonopoulou who is a team lead for Green Turtle project explains that “Green turtles are associated with sea grass habitat and this habitat is not only important for marine turtles but also for marine life in general. And what we want to do is by using marine turtles to identify important areas for biodiversity that can be conserved for the whole marine ecosystem”.

“What we expect the planet to be, in the coming fifty or hundred years, the Gulf is already experiencing today. In many ways this is like a “living laboratory” for studying how climate change can impact marine species,” said Nicolas Pilcher, Executive Director of Marine Research Foundation.

Marine turtles have been on Earth for more than 100 million years. They have survived the dinosaurs and have a great capacity to adapt.

By learning about marine turtles, we understand more about the status of our seas and we can better protect them in the future.