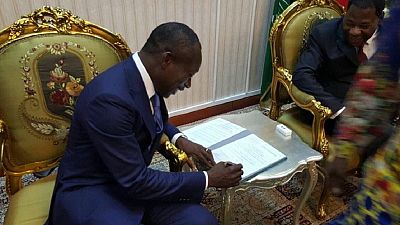 Benin’s new president, Patrice Talon has appointed 2 of his ‘opponents’ in last month’s election as Ministers of State, according to a new cabinet list released on Wednesday.

Abdoulaye Bio Tchane and Pascal Irenee Koupaki who were 4th and 5th in the first round of the poll have been appointed as Minister of state in charge of Development and First Secretary to the presidency respectively.

The two men backed Talon’s candidature in the runoff poll against the then Prime Minister, Lionel Zinsou.

Three women have also been given cabinet positions and they will be in charge of Higher Education, Employment and Communication.

The Deputy Special Representative of the Secretary-General for the United Nations’ Mission in the Central African Republic (MINUSCA), Aurelien Agbenonci will head the Foreign Affairs Ministry.

President of the Law Commission of Benin’s National Assembly, Joseph Djogbenou has been handed the Justice portfolio.

Several other allies of businessman Sebastian Ajavon, whose support was crucial to Talon’s victory according to AFP are also expected to make their way into government.

Patrice Talon is yet to name a Prime Minister for his administration. Sworn into office on Wednesday, Talon won the runoff poll with 65.37 percent of the votes.

He takes over from Thomas Boni Yayi who decided to step down after serving his two terms in office.