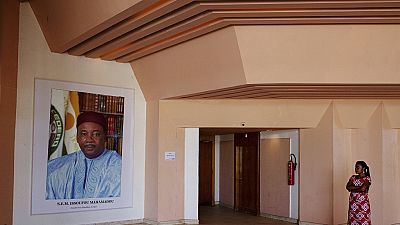 Niger’s President Mahamadou Issoufou, has been sworn into office for a second five-year term after he was reelected in the March 20 poll runoff.

The swearing-in ceremony was held in Niamey and was graced by nine African heads of state who watched Issoufou being sworn on the Quran after which he delivered a brief speech hitting out at terrorism and reiterating calls for a unity government.

Issoufou whose country suffers from Boko Haram insurgency promised to continue the fight against terrorism, “terrorism is an absolute evil,” he said, stressing that: “until we have eradicated terrorism in Northern Mali and ended the chaos in Libya, it is useless sleep in peace.”

Terrorism is an absolute evil, until we have eradicated terrorism in Northern Mali and ended the chaos in Libya, it is useless sleep in peace.

Issoufou was pushed into a runoff after he failed to clinch a first round victory in February polls, he however won an opposition boycotted runoff by a landslide over Hama Amadou who had been flown to Paris to seek medical treatment.

“On 20 March, the people made their choice in peace and renewed their trust in me for a second term,” said Mr. Issoufou, who after the election had offered the opposition to include a government national union proposal currently rejected by the opposition.

Mahamadou Issoufou faces a revolt of the opposition, which rejected his proposal for a national unity government rather calling for a “transition” to conduct new “transparent and credible” elections.

On the security front, six soldiers were killed on Friday in an attack in southeast attributed to Boko Haram. On 17 March, three days before the presidential election, a military commander was killed in a suicide attack in the same area.

The same day, three policemen were killed in western Niger during an attack attributed to Al-Qaeda in Islamic Maghreb (AQIM). These attacks have led to the displacement of hundreds of thousands of people in the southeast.