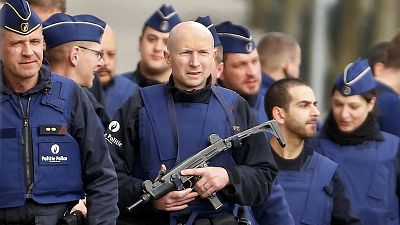 Belgian police have killed an Algerian man, Mohammed Belkaid believed to be a terrorism suspect.

He was killed during a police raid on a Brussels apartment linked to last year’s Paris attack.

The victim had been illegally residing in Belgium and was shot dead when he opened fire at police from a window.

“One suspect was neutralised by a sniper of the special forces when he tried to open fire on the police from the window of a flat where he was hiding. His body was found in the flat during the subsequent house search. Next to the body was an ISIS flag as well as a book on Salafism,” said Eric Van Der Sypt, spokesperson for the Belgian Prosecutor’s Office.

Belkaid was in the company of two other suspects who managed to escape after an intense and prolonged firefight but police are pursuing them.

Four officers were wounded in the Tuesday attack that investigators expected to be a routine search of the apartment.

As part of the post-Paris probe, more than 100 houses have been searched and at least 58 people have been arrested.

Many of those tied to the Paris massacre lived in Belgium, and they’re believed to have met there before planning the attacks.

There are concerns more individuals from the same place may be preparing to launch other attacks.