Samuel Eto'o: The star of an upcoming video game 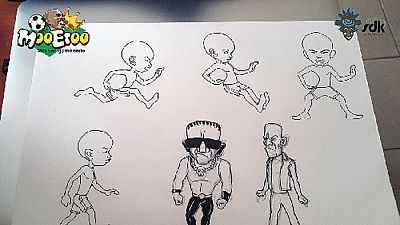 After releasing his autobiography in nine volumes of comic books illustrated by Cameroonian artist Joelle Esso, Samuel Eto’o is back in the arts, this time, he is the ‘target man’ in an adventure video game by South African developers, SDK studio.

MooEtoo is a video game which covers an adventure in which Cameroonian international footballer, Samuel Eto’o, must pursue his dream by taking the right decisions and winning the largest number of fans.

The game is entirely based on the life of the former Barcelona, Chelsea and Inter Milan star. The project is the challenge that has been set up by SDK studio. For the realization of this project, the video games creation company launched a fundraising campaign to raise about 16 million FCFA.

If our initial target is reached, 60% of this amount will be dedicated to the design of the game, 10 to 15% for sound, 10% to promote the game and 5% will correspond to the costs of Freudon.

The initiative begins on March 31, 2016 on the Freudon platform provided for this purpose. “If our initial target is reached, 60% of this amount will be dedicated to the design of the game, 10 to 15% for sound, 10% to promote the game and 5% will correspond to the costs of Freudon,” says Yves Christian Fongang, one of the developers of the SDK, in a statement released Tuesday, March 1, 2016.

Cameroon – Samuel Eto’o: A video game for the Megastar named MooEtoo to be released soon! https://t.co/dVoRU3RSTj via kmersaga237

Eto’o, in this adventure, is the main person and must pursue his dream of exploiting his talent. He must also avoid trouble in the harsh environment in which he operates.

Specifically, it is a matter for the (game) player to win games, trophies and money. To complete the adventure, the player must win a maximum of fans. He will therefore be tasked with selfless acts that will appeal to the hearts of local people and increase the number of fans.

With this video game, the SDK studio which is based in Johannesburg, South Africa; aims to provide more than entertainment to Cameroonians.

“We want to solve both the problem of lack of 100% African games and of the lack of knowledge by students and young Cameroonian graduates in the field of video game design,” said Yves Christian Fongang.