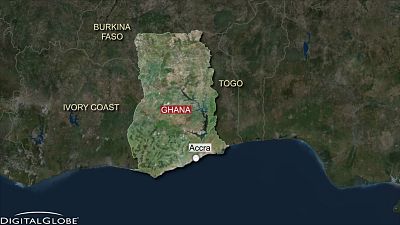 The accident occured at about 2000GMT at Kintampo, a tourist town on the way to Ghana’s northern region.

A public commuter bus, the Metro Mass Transit (MMT) and a truck carrying tomatoes had a head-on collision north of the capital Accra.

The truck was believed to be heading towards the nation’s capital Accra from the Burkinabe capital, Ouagadougou.

Police say the injured are receiving treatment at the Kintampo government hospital.

The driver of the truck and two other passengers on board died on the spot, according to local media.

Brong Ahafo Regional Police Commander DCOP Maxwell Atingani, told local media outlet Joy News on Thursday that according to an injured passenger on the MMT, the bus developed a brake problem when it got to Techiman, about 62km from the crash site.

The passenger told police the driver of the bus stopped to fix the problem, but the mechanic who worked on the vehicle could not solve the problem.

However, the bus driver, determined to reach his destination, continued the journey with the faulty brakes and on reaching a sharp curve at Kintampo, the brakes failed and his vehicle rammed into the cargo truck.

Efforts by a team of military, fire service and police personnel to free passengers trapped in the mangled MMT bus for a several hours proved unsuccessful.

Reports indicate locals greatly helped with efforts to remove bodies of the dead and those who were injured.