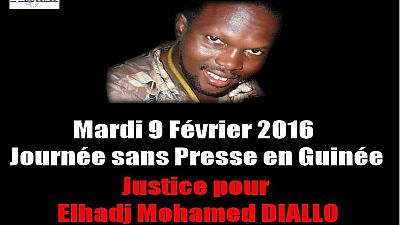 No newspapers. No news bulletins on radio. A photograph of El Hadj Mohammed Diallo on television screens and on homepages of news websites.

That was how the media in Guinea chose to honour their murdered colleague, El Hadj Mohammed Diallo who was shot dead last week.

Tuesday’s unprecedented Day Without the Press was initiated by five media associations asking the media to go quiet until 22:00 hours local time.

Too often, journalists are killed in Africa, with total impunity. Diallo was killed in connection with his work ... those responsible must be brought to justice.

An AFP journalist in Guinea said a picture of Diallo smiling on a black background filled the home pages of news websites and television screens with the words “Tuesday February 9, 2016. Free Press Day in Guinea. Justice for El Hadj Mohammed Diallo.”

Diallo, a reporter with the local news portal Guinée 7, was shot in the chest on February 5 during clashes at the headquarters of the opposition Union of Democratic Forces of Guinea (UFDG) party in Conakry.

Although it was not immediately clear who shot him, some witnesses said the shot was fired by a UFDG member.

Programming on local radio stations were halted with silence or soothing music filling the air. The news stands were also empty.

Web administrator for Guinea-Matin, one of the most visited websites in Guinea, Nouhou Baldé expressed the hope that the sacrifice made by the Guinean media to forgo their profits for a day would capture the attention of authorities working on the conditions of journalists in the country.

Journalists in Guinea on Monday marched through Conakry demanding appropriate action against the perpetrators of the crime.

A criminal investigation has been opened into El Hadj Diallo’s death and the Justice Minister, Cheick Sako has assured “this crime will not go unpunished.”

Reporters Without Borders on Tuesday said it was “deeply shocked by the death of El Hadj Mohammed Diallo” adding that it hopes the investigations will reveal the culprit.

The International Federation of Journalists (IFJ) has also asked that nothing be left to chance as far as the investigations are concerned.

“Too often, journalists are killed in Africa, with total impunity. Diallo was killed in connection with his work, and those who are responsible must be brought to justice,” said IFJ President Jim Boumelha in a statement.