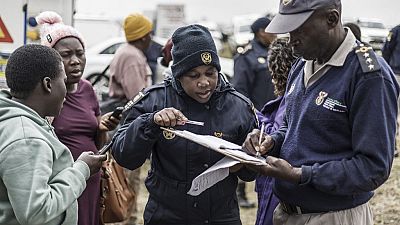 Precious continues, as if nothing had happened, to iron the clothes of the children of the white South African couple for whom she has been tidying and cleaning for years, undeclared: earlier, on her way to work, this undocumented Zimbabwean was stopped by the police.

In South Africa, a large part of the middle and upper classes still employ, 30 years after apartheid, mostly black maids. They are easy labour, hired for modest wages equivalent to 20 or 30 euros a day.

These women often come from poor neighbouring countries such as Zimbabwe or Malawi. Many are living in the country illegally.

In recent weeks, the police have stepped up checks in the Johannesburg area. "We are conducting weekly operations," Gauteng provincial police commissioner Elias Mawela told AFP.

"It's not good to be a foreigner these days," says Precious, folding a pair of velvet trousers. A sombre look fills the face of this tall, square-shouldered black woman.

Early that morning, at the time when the cleaning ladies were returning to their homes in the economic capital's upmarket neighbourhoods, the police raided a minibus taxi station, the public transport of a broke workforce. Precious, 36, was arrested as an illegal immigrant.

The "rainbow nation" officially has 3.8 million migrants. In a country regularly plagued by outbreaks of xenophobic violence, the national statistics agency no longer records the country of origin or administrative status in censuses.

The figure is considered a gross underestimate: Africa's leading industrial power attracts economic migrants from all over the continent, even as the population of about 60 million struggles with record unemployment, which affects one in three working-age South Africans.

Zimbabwe has a long history of immigration with South Africa. Fleeing the political and economic crisis, 250,000 Zimbabweans were granted four-year work permits in 2009 and their visas have since been continually renewed. But many have also followed the wave illegally and risk being sent back to the border.

For those with permits, South Africa also announced last year the end of permit extensions, paving the way for mass deportations. The government is currently extending the six-month reprieve, leaving many Zimbabweans in limbo and crystallising xenophobic resentment.

Recently, anti-foreigner activists blocked access to a Pretoria hospital after a video went viral of a health department official berating a Zimbabwean for coming to South Africa for treatment.

In the back of the police van, Precious sent a message to "Ma'am", as she calls her boss, warning her that she would be late.

Basically, "I was scared," she says in a surprisingly neutral tone. This way of not letting anything show, she has acquired over time.

Giving birth at 25 in a poor hospital in Zimbabwe taught her to grit her teeth. "There's nothing there, not even water to wash the baby after it's born. No painkillers either.

When he was arrested, a policeman offered him a deal: 1,000 rands (56 euros) in cash and forget about it, otherwise "at the station, it will be more expensive and we don't know what might happen".

In a country with one of the highest crime rates in the world, the South African police have a notorious reputation for inefficiency and corruption.

When asked about the officer's behaviour, Commissioner Elias Mawela stressed that any act of corruption by law enforcement officers must be reported for investigation.

Precious had to make calls to find the money. She will have to pay it back, she says. The equivalent for her of a week's salary.