Chief Justice and President of the Supreme Court Lady Justice Martha Koome delivered the verdict Monday afternoon by dismissing many of the petitions that alleged fraud in the technology used in the electoral process while recognizing what it called a serious malaise in governance of the electoral commision.

However, the court concluded that the last minute "electoral rupture is insuffient to invalidate or annul the vote". Judges also found no credible evidence that there was any tampering with the uploading of forms 34A to the public portal and no evidence of unexplained discrepancies between votes cast in various elective positions across the country and those cast in favor of the vice president William Ruto.

The lawsuit had sought to overturn the results of the presidential election and has left the East African nation in political limbo.

Opposition leader Raila Odinga, who failed to secure the presidency on his fifth attempt, along with six other parties, petitioned the court to nullify vice president William Ruto’s win. They alleged massive irregularities that compromised the fairness of the Aug. 9 vote. The official results showed Ruto secured 50.5% support and the veteran opposition figure Raila Odinga 48.8%.

While Wafula Chebukati, the chairman of the Independent Electoral and Boundaries Commission, defended the integrity of the election, four of the body’s other six members distanced themselves from his pronouncement, citing a lack of transparency over the count.

This, Justice Martha Koome described as a last minute rupture particularly since all members of the electoral commission had actively and fully participated in the process of tallying and verification of results up until the point of disagrement. A group of 5,000 local observers said the results were in line with its own parallel tallies.

During the last presidential election in 2017, the Supreme Court overturned the election and ordered a new vote, a first in Africa.

Elections in Kenya have repeatedly been sources of violence. The deadliest, in 2007, left more than 1,100 people dead in politically motivated clashes and displaced hundreds of thousands.

Although the current electoral process has been largely peaceful, there are still fears for any potential unrest. 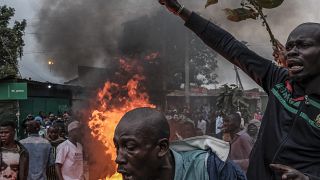