In Sudan, a pro-democracy doctors union announced the death of a protester on Wednesday during demonstrations in the capital, Khartoum.

So far, 117 people have been killed as a result of the repression of anti-coup demonstrations that regularly denounce the 25 October 2021 putsch led by army chief Abdel Fattah al-Burhane.

"We have been protesting since Burhan's coup last October and we will continue (to protest) with determination and persistence to bring down the coup, despite that many people were killed and thousands were wounded but protesters insist on continuing the revolutionary path", said protester Abu Bakr Saleh.

In early July, General Burhane announced that the army would let civilians form a government on their own, but the main civilian bloc rejected the proposal, denouncing it as a "tactical retreat" to maintain the army's influence in the country.

The protesters say there will be "no negotiation or compromise" with the military.

According to the UN, one in three Sudanese need humanitarian aid in a country where inflation is close to 200% every month, the currency is in free fall and the price of bread has increased tenfold since the coup. 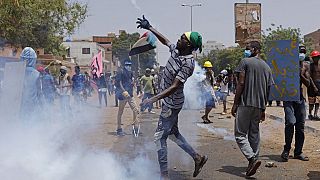