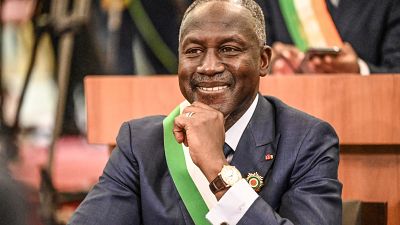 Adama Bictogo, an executive of the ruling party in Côte d'Ivoire, was elected president of the National Assembly on Tuesday.

This comes a month after the death of his predecessor Amadou Soumahoro.

"The gathering and consensus that we called for with all our wishes have become a reality through this election. Our fraternity, our solidarity, our commitment to the general interest have transcended our political sensitivities," Mr Bictogo said after his election.

Mr Bictogo, who already enjoyed the support of the Rassemblement des Houphouëtistes pour la Paix (RHDP), the majority in the Assembly, received Tuesday morning the rallying of the main opposition parties, including the Democratic Party of Côte d'Ivoire (PDCI), from which his rival Jean-Michel Amankou comes.

In a statement read from the gallery before the vote, opposition parliamentary groups, including the PDCI of former president Henri Konan Bédié, and the African People's Party-Côte d'Ivoire (PPA-CI) of the former head of state Laurent Gbagbo, called on their deputies to vote for Mr Bictogo. "We want to give our part of the signal, to our country so that the reconciliation process so hoped for by all, finally becomes a reality for all," the statement said.

"We are not in a context of permanent conflict. There are areas in which rapprochement is possible. The Ivorian people will see that we are not a dogmatic opposition," said the head of the PPA-CI group, Hubert Oulaye, after the vote.

Bictogo has been a member of parliament for the commune of Agboville, north of Abidjan, since 2011 and has held several senior positions in President Alassane Ouattara's party in recent years.

He was also vice-president of the National Assembly since April 2021, acting in the absence of Amadou Soumahoro who had been absent for many months before his death on 7 May. He was also Minister of African Integration between 2011 and 2012.

In addition to his political career, Mr Bictogo is the CEO of the Ivorian group Snedai, which is involved in digital issues including cybersecurity and produces biometric passports.