The project was funded by the US embassy in the capital through a charity,  Make Life Skate Life.

For many this is a dream come true.

"As I was growing up, I saw my neighbours skateboarding and kept thinking about it. When I got older, I used to watch videos and learnt from them how to master the tricks. (...) Personally, I come once or twice a week. If I got the chance on a day off or if there was no school, I would come too", said high school student Mohamed Abderraouf.

Female student Rayan al-Omar added "skateboarding is my hobby. I'm really happy, because before there wasn't a dedicated place for skating".

After more than a decade of conflict, young Libyans yearn for a return to normality. The opening of the first skate park generated a lot of interest amongst the local youths.

The designer believes skateparks can help to build communities.

The skatepark was built by volunteers and is part of a seaside park that includes a cycle route and football pitches. 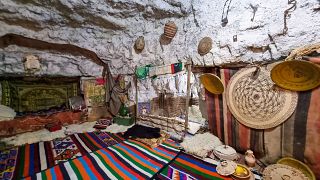