West African leaders on Friday said they would uphold the regional sanctions imposed on Mali in January after its military leaders said they would stay in power for four more years instead of holding an election in February.

The regional economic bloc known as ECOWAS made the decision during a summit in Ghana’s capital Accra, where they also discussed the situations in other coup affected member states including Burkina Faso and Guinea.

The sanctions in Mali suspended most commerce and financial aid to the country and included land and air border closures with other countries belonging to ECOWAS.

The African Economic and Monetary Union Court of Justice on Thursday ordered the suspension of those sanctions after Mali’s leaders filed a legal complaint against them, saying they would severely affect Malians.

However, ECOWAS President Jean-Claude Kassi Brou said after the closed-door meetings that it was the only authority that could lift such sanctions.

The sanctions, he said, were imposed and must be respected by all countries in the region.

He reiterated that ECOWAS leaders wanted an 18 to 24-month timeline to return the country to civilian rule.

Doubts deepened about his intentions, though, after he effectively launched a second coup nine months later, forcing out the chosen transitional civilian leaders and becoming president himself.

The junta led by Goita, which had initially agreed to hold a new election in February, said in January that new elections would instead by held in 2026, giving Goita four more years in power.

The regional leaders on Friday also called for the immediate release of Burkina Faso’s former president Roch Marc Christian Kabore who has been under house arrest in the capital Ouagadougou since Burkina Faso’s military seized power in a coup in January.

The junta has vowed to secure Burkina Faso from growing jihadi violence linked to al-Qaida and the Islamic State group that’s killed thousands and displaced more than 1.5 million people.

Brou said that the leaders called for his immediate release without condition.

The West African leaders also rejected a 36-month transition proposal by the junta ruling Burkina Faso, saying it must be reviewed.

ECOWAS leaders gave Burkina Faso a one-month timeline to come up with what it called an acceptable plan for a transition.

Speaking about the coup in Guinea, Brou said “the situation in that country had seen some progress, but some key elements have become a source of worry to the leaders of ECOWAS.”

Broud said it would give Guinea until April 22 to deliver a timeline on democratic elections or the country would face further sanctions.

Mali, Guinea and Burkina Faso are three members of the 15-strong ECOWAS bloc. 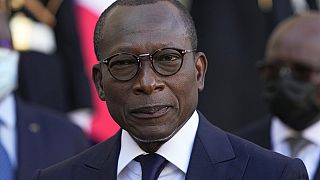 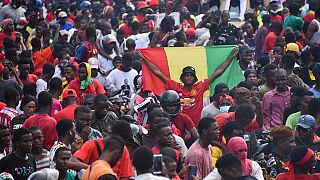