Thousands of Sufi Muslim pilgrims gathered in Dakar on Friday for the first time 2019 without restrictions related to Covid-19.

The followers of the Layene Sufi Muslim brotherhood, dressed in long white cotton robes, met in the Camberene district in the northeast of the city, one of their strongholds.

Men on one side, women on the other, they sang their traditional songs and chanted prayers.

The mass annual pilgrimage was cancelled in 2020 and 2021 due to the restrictions imposed to tackle the Covid-19 pandemic.

The Senegalese Muslim brotherhood of the Layene, founded by Seydina Limamou Laye (1843-1909), advocates unity and equality. This, the pilgrims said, is why all of them were dressed the same way, and all are named Laye.

One of the pilgrims, Ousmane Laye, told AFP that "the founder of the brotherhood announced that he is the reincarnation of the Prophet Mohammed, which is why he is considered a messenger of God".

In Senegal, which is nearly 95 percent Muslim, most followers of one of the four main Sufi brotherhoods; the Mouride, Tidiane, Layene and Khadre, all of which are very influential and play a major social role. 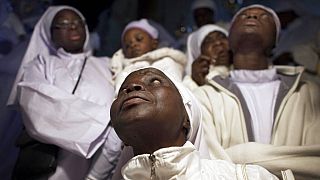