The sixth European Union-African Union summit is about to get underway in Brussels. It will see the leaders from both continents gather for two days to discuss their partnership, trade, investments, education and agriculture.

This latest meeting comes almost five years after their last summit, but the world is a very different place, with the pandemic and the worsening effects of climate change expected to loom large.

Greater prosperity is the main goal pursued by African and European leaders as they hash out details of their common vision for 2030. Macky Sall, the chairperson of the African Union, recently outlined the pillars of this partnership, during a visit to Senegal by European Commission President Ursula Von der Leyen.

Our common ambition - Africans and Europeans - for this summit, is to reach a renewed partnership, modernised and focused more on action.

The European Union has earmarked 150 billion euros for investment in Africa to help with the green and digital transition, job creation, health and education.

Jutta Urpilainen, EU Commissioner for International Partnerships said: "There will be grant financing but also loans, and hopefully we are able to also work and get some private sector contribution to that package, so the idea is to really have a concrete tangible project.

These projects in Africa could include anything from green energy production to infrastructure and vaccine facilities. The Democratic Republic of Congo is a key diplomatic player between Africa with Europe. In addition, it is blessed with vast mineral resources and a young population.

But Anafak Japhet, a professor of International relations at the University of Yaoundé says more needs to be done to maximise this potential.

"European technologies, and European skills, continue to be deployed in Africa without training the local population, without transferring technology locally. So the success of the DRC needs two things: the transfer of technologies and management training."

The development of local industries and technologies are at the core of Africa's vision for the years ahead, to bring benefits to the local population, but also improve the continent`s relations with the rest of the world. 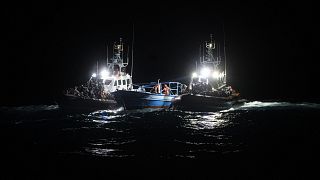