The President of Senegal, Macky Sall, has awarded cash prizes and plots of land to members of the national team after after last weekend's victory over Egypt in the African Cup of Nations.

The Senegalese beat Egypt 4 - 2 on penalties to become Africa's football champions for the first time.

Speaking at a ceremony in Dakar on Tuesday, President Macky Sall, reaffirmed the pride the team had brought to the country.

"We dreamed of the cup, you built this dream and you made it come true. Finally, the Africa Cup of Nations is here with us. You have made us proud by making the name of Senegal resound all around the world. You have honoured the nation, and in return, the nation you are so proud of owes you honours", said the president during a speech.

During the ceremony, the Senegalese president appointed team members to the country's prestigious Order of the Lion.

The team's captain spoke movingly about the meaning of this victory.

"From now on, where our hearts were -- we now have a map of Senegal, a people, a goal, a faith and of course a star (on the jersey after winning AFCON), the Africa champions star. 'We can be killed but not dishonoured,' that was our slogan throughout the competition", said tema captain, Kalidou Koulibaly.

Senegal have narrowly lost twice before in the AFCON final, in 2019 and 2002. 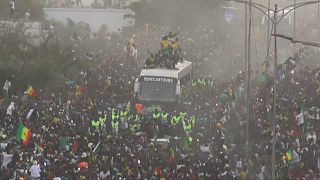