The East African Community (EAC) has achieved full economic integration, at least on paper. The six-nation bloc is a customs union and a common market.

The community in reality is beset by all manner of trade wars and uncoordinated policymaking, the lack of a common response to Covid-19 being one of them.

The adoption of a testing requirement for all truck drivers entering Uganda from Kenya two weeks ago sparked a strike which has led to an acute fuel shortage in Uganda. It has rattled supply chains and caused businesses millions in losses.

Uganda is the channel through which cargo to Rwanda, Burundi, and South Sudan is trucked from the East African coast.

Each member of the bloc has adopted unique pandemic regulations. While Tanzania, Burundi, and South Sudan have been less strict, Uganda and Rwanda's rules have been seen as punitive for trade.

Pandemic measures have more than doubled the number of days it takes to transport goods, as well as the cost, according to the Shippers Council of Eastern Africa.

EAC member states lost $3.36 billion worth of trade due to Covid-19, according to a trade and investment report for the bloc for 2020.

The lack of a common pandemic policy and the unending political tensions have undermined further integration and cross-border trade.

Martin Luther Munu is a trade analyst. He joins the show with insights on how members of the bloc can increase intra-community trade.

Millions of people in Nigeria are food insecure. Africa’s most populous country still doesn’t produce enough to feed everyone.

In 2019, Abuja closed borders with its neighbors, ostensibly to control smuggling and to protect domestic food production.

Through a credit scheme, Nigeria’s central bank is lending to rice farmers to help them increase acreage and production.

The crop is at the center of the country’s ambitious goal of achieving food and nutrition self-sufficiency.

Did you know that 80% of intra-African transactions are settled outside the continent?

The use of third-party currencies in intra-African trade has been costing the continent $5bn every year and curtailed the pace of free trade.

Backed by the Afreximbank, the Pan-African Payment and Settlement System (PAPSS) provides a superhighway for intra-African payments.

Put simply, a chocolate producer in South Africa can now buy and pay for cocoa beans from Ghana without needing a third-party currency. 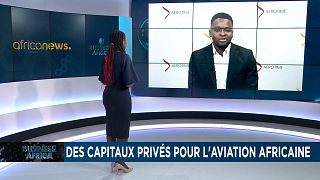