The Ethiopian government has announced on Thursday the expulsion of seven UN officials.

The government accuses the diplomats of interference in internal politics as pressure grows on the Executive to lift the blockade on the Tigray region.

The move was condemned by the UN Secretary-General, António Guterres through his spokesperson.

"All UN humanitarian operations are guided by the core principles of humanity, impartiality, neutrality, and independence. In Ethiopia, the UN is delivering lifesaving aid including food, medicine, water, and sanitation supplies to people in desperate need. I have full confidence in the UN staff who are in Ethiopia doing this work. The UN is committed to helping Ethiopian people who rely on humanitarian assistance. We are now engaging with the Government of Ethiopia in the expectation that the concerned UN staff will be allowed to continue their important work", said Stephanie Tremblay, Associate Spokesperson for the UN Secretary-General.

The announcement by the Ethiopian government sparked a reaction from the White House.

"The US government condemns in the strongest possible terms the government of Ethiopia’s unprecedented action to expel the leadership of all of the United Nations organizations involved in ongoing humanitarian operations. We agree with UN leaders: This is a stain on our collective conscience, and it must stop", declared Jen Psaki, White House Press Secretary.

The Tigray region is home to six million people and has been at war with Ethiopia and its allies for almost one year.

According to the UN, in recent weeks only 10% of humanitarian supplies have been reaching the areas in need. 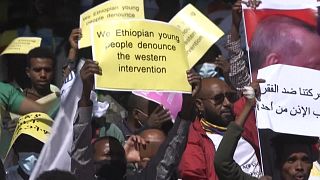 Ethiopia rallies against US over Tigray restrictions

Ethiopia rallies against US over Tigray restrictions