A Namibian court on Monday rejected a request by a Mexican-Namibian gay couple to return to the country with their two one-month-old daughters, born to a surrogate mother in South Africa.

Since the birth of the twins in mid-March in Durban (east), their fathers, Phillip Lühl, 38, from Namibia, and his Mexican partner Guillermo Delgado, 36, both architects living in the Namibian capital Windhoek, have been unable to take the twins home.

The Namibian authorities refuse to issue travel documents to the two newborns, demanding that the couple prove their biological parentage. By taking the case to the country's courts, the two men, who accuse the Namibian government of "discrimination" because of their sexual orientation, hoped to obtain at least provisional travel documents.

In its decision, the Windhoek High Court said it did not want to engage in "judicial overreach" by ordering the Ministry of Home Affairs and Immigration to issue emergency travel certificates to the twins, Maya and Paula.

This is "a big blow and a big disappointment", Phillip Lühl told AFP. Currently in Johannesburg, alone with his two daughters, he had hoped to be able to join his partner and their first son, also born of a surrogate mother, in Namibia, whose case has still not been decided by the country's courts.

This court decision "is part of a broader pattern of very tough resistance to any progress towards equal rights for all", says Lühl.

In Namibia, homosexuality is still illegal, although in practice the 1927 sodomy law is rarely enforced today.

The two men were married in South Africa in December 2014. The Namibian Ministry of Home Affairs refused to recognise their union.

The twins were born on 13 March. South African birth certificates list the couple as parents.

South Africa has been the only African country to allow same-sex marriage since 2006. Many neighbouring countries such as Botswana, Mozambique and Angola have decriminalised homosexuality. 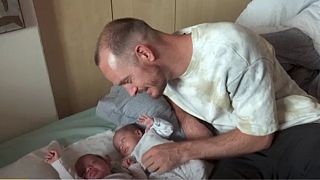