Residents describe the scene as a poor neighborhood in the Sierra Leonean capital, Freetown was gutted by fire late Wednesday March 24.

Authorities in the city said the death toll is unclear, but thousands may have been affected by the inferno.

"This fire started from the seaside coming in with heavy winds. While the fire was in progress, it changed its direction to another side at around 6:30 pm. It kept moving to the eastern part and later spread all over, it was out of control. About four hundred or more houses are gone. Most of us here are traders so fortunately most people were out doing business when the fire occurred", Foday Turay, an affected resident said.

Most homes in the vicinity of Susan Bay are flimsy constructions made up of sheeting and recovered materials.

The community is clustered on Freetown’s seafront, close to the city’s historic centre.

The European Union Ambassador to the country, Tom Vens said, it was looking at ways to sending aid to the survivors.

It’s been further hit by a slump in global commodity prices and the impact of the coronavirus pandemic. 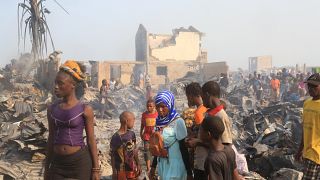