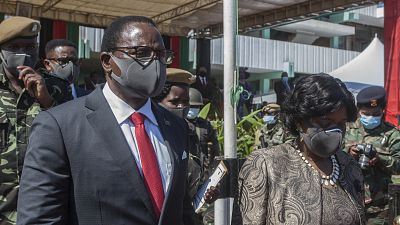 The two are the highest ranking public officials so far to succumb to the virus in Malawi.

"We have entered the eye of the pandemic", Chakwera said during an address to the nation on Tuesday afternoon.

He said the government was considering declaring a state of emergency.

Malawi has recorded 9027 cases and 203 fatalities. The southern African nation has confirmed 1500 cases in the last 14 days alone.

On Tuesday, the presidency said it was cutting visits to the State House to ensure the President’s safety, local daily the Nation reported. Weekly press briefings have also been suspended.

On Sunday, Chakwera said he was entering a 21-day prayer and fasting session against Covid-19.

The pastor-cum politician has been criticized for not taking the pandemic seriously.

In October, he faced public criticism for not wearing a face covering when he met with his Tanzanian counterpart, John Magufuli, during a three-day official visit to the east African country.

This month, Chakwera was also criticized after he was seen without a face mask and shaking hands with American singer Madonna at his state residence in the capital, Lilongwe.

Madonna has four adopted children from Malawi and runs a charity there.