As tens of thousands flee violence in Ethiopia's Tigray region, a clinic in a Sudanese refugee camp is seeing increasing numbers of patients.

One of these patients is Alam Kafa, who on Wednesday was waiting to be transported from the Umm Rakouba camp to hospital.

Kafa was injured with shrapnel from an explosion in his hometown of Himoras.

For three days he walked in pain, using a stick as a crutch.

But by Wednesday his injuries had worsened and his wound was infected.

"When it is cold, it hurts so much. At night, I have to wrap it tightly with a blanket so I can sleep. But I don't sleep at night", he said

Javanshir Hajiyev, a doctor and team leader of the Mercy Corps aid organisation, said the clinic was seeing about 80-90 patients per day, with numbers rising.

He listed diarrheal diseases, chest infections and malaria as the most common ailments.

"The diarrheal diseases are a direct result of the poor hygiene. These people don't have access to the clean water and washing materials", said Hajiyev.

The United Nations estimates around 40,000 people have the fled the violence in Tigray region since Nov. 4. 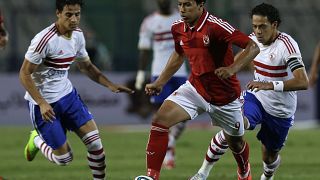